Recently, I was scrolling through social media when I saw a post that gave me pause. The social media post is presented below: 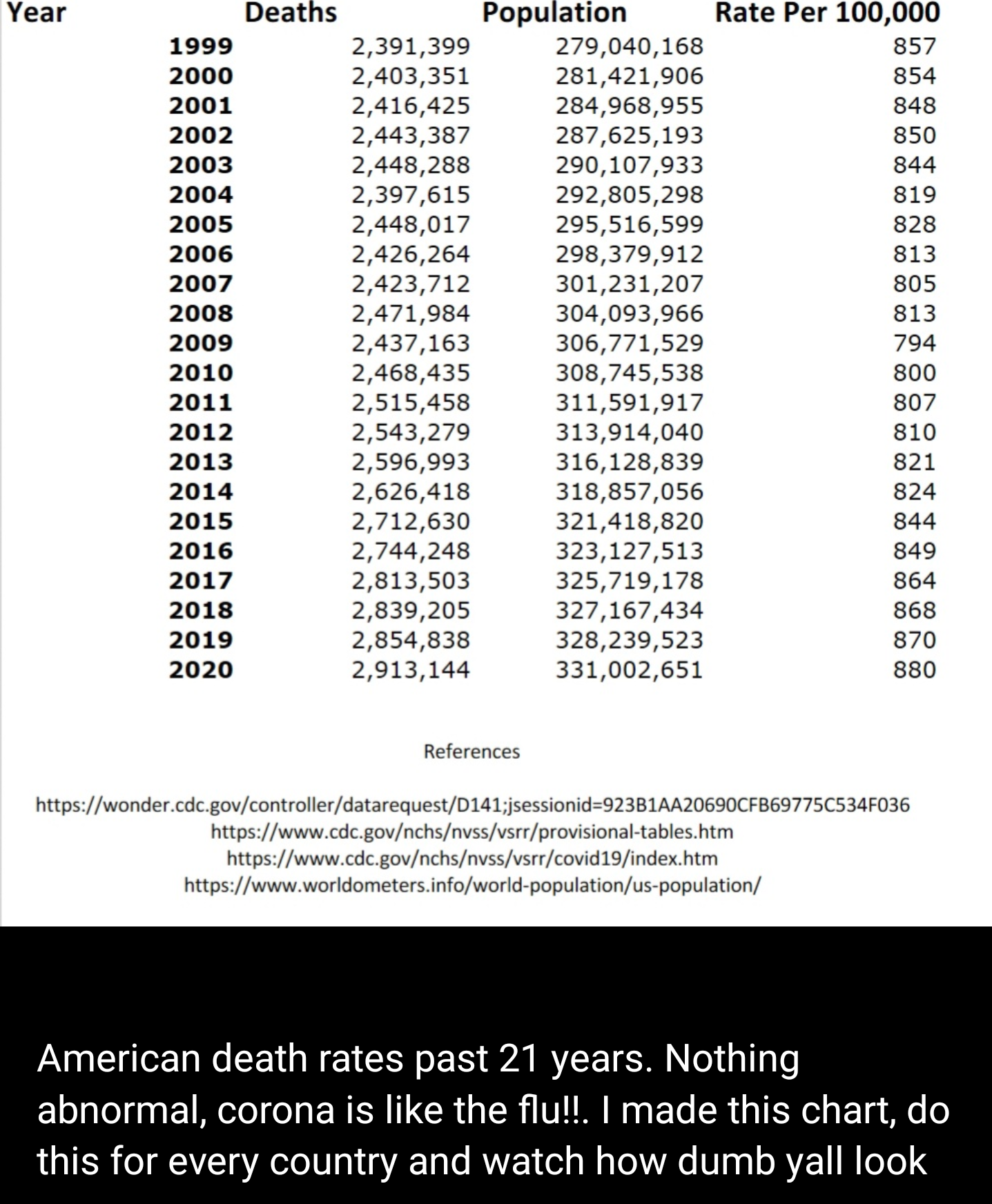 The post caught my attention for three reasons: (1) it presented a falsifiable hypothesis, (2) the conclusion was counter-intuitive, and (3) there was an obvious challenge issued. Anyone reading this that knows me will know that I find falsifiable hypotheses exciting because they deal with evidence and once we agree on the evidence, some hypotheses can be disproven with evidence. Here the falsifiable hypothesis is also the counter-intuitive conclusion, namely that COVID-19 has not affected mortality rates in the United States ("Nothing abnormal [about 2020 mortality rates], corona is like the flu"). What really motivated me to write this blog series was the message being sent in the last sentence of the blog post and the associated references below the table. The implicit challenge was that given government data sources, one could also determine that mortality rates had not changed in the U.S. or other countries. As Barney Stinson would say, "Challenge Accepted!"

Government mortality data is available via the open data portal Socrata. You can sign up for a Socrata account here and create a developer application to programmatically download Socrata data by following these instructions

Once you have established your Socrata Developer credentials, you can leverage an R package that connects to the Socrata API called RSocrata

First, let's load the libraries we will need for the analysis

Then let's bring in our Socrata credentials from a local file called socrata_app_credentials.yml

Yearly mortality from 1999 to 2020 does not exist in one dataset, so we will need to combine 3 government datasets to create our own data to answer the challenge presented in the social media post. The first government dataset is yearly mortality data from 1999 to 2017 from the National Center for Health Statistics (NCHS). The NCHS is a part of the Centers for Disease Control and Prevention (CDC) and provides statistical information for public health policies. The documentation for the NCHS data is available here

We follow that up with the weekly state mortality data from 2019-2020 from NCHS. From the NCHS documentation we learn that the 2019 and 2020 counts of death are provisional and not yet complete because of a data lag:

In general, the births and deaths data we receive from NCHS have a two-year lag. This means that the most recent data we have on births and deaths by geographic and demographic detail for each vintage of estimates refer to the calendar year two years prior to the vintage year. For example, the most current full-detail births and deaths data we used in Vintage 2020 were from calendar year 2018. We also receive preliminary or provisional NCHS total numbers of births and deaths at the national level for the year prior to the vintage (in this example, 2019). Using these data and the data received from the [The Federal-State Cooperative for Population Estimates (FSCPE)], we create short-term projections that approximate the final NCHS data by characteristics, the preliminary NCHS national totals, and the FSCPE data (where available) by geographic distribution. (pg. 4)

This point is important because in the future counts of death may be revised upward or downward and could change the conclusions drawn in this post.

glimpse of the yearly mortality dataset

In the next blog post, we will gather the population U.S. population data necessary to create mortality rate statistics.